The “Greater Bay Area” – or GBA – has become a recurring buzzword in both printed and social media since it was first coined by the People’s Republic of China Government four years ago. And for good reason. The strategic amalgamation of 11 municipalities – including the four vibrant, world-class cities of Hong Kong, Macau, Guangzhou and Shenzhen – into a single megalopolis, promises to put the region on a par with legendary global locations like San Francisco, Tokyo, and the Sydney Bay Area.

However, before any strategy can become a success, it needs a well thought out execution plan. That arrived in February, when the Central Government, in tandem with the Hong Kong and Macao SAR the Government’s, rolled-out a well-calibrated blueprint aimed at turning this grand vision of a thriving and innovative metropolitan axis into a concrete reality.

Some of the blueprint’s highlights included:

“By 2022, the combined strength of the Greater Bay Area should increase substantially, the cooperation among Guangdong, Hong Kong, and Macao should be deepened and broadened, and the internal driving forces for development should enhance in the region.”

”By 2035, the Greater Bay Area should become an economic system and mode of development mainly supported by innovation, with its financial and technological strengths vastly increased and its international competitiveness and influence further strengthened.”

Although the GBA is sometimes described as China’s answer to Silicon Valley, it is probably people, just as much as technology, who hold the key to Hong Kong’s future as part of the new economic powerhouse.

Putting visionary governmental policies in place, and industries adopting a positive outlook towards digital transformation, is only part of the picture. Recognizing the importance of nurturing human capital is an essential part in any long-term plan. It’s the secret ingredient for creating a “smart” and successful GBA.

Recent research by LinkedIn and the Tsinghua Business school has revealed an interesting trend. The study covered the digital spread of talent within multiple industries operating within the Greater Bay Area. The penetration of digital skills is highest across the Infocomm Communications and Telecommunications (ICT) sectors, leaving media communications and education well in the distance at second, third and fourth place respectively.

This pattern shows that, while some sectors are clearly in the lead, there is tremendous potential for the adoption of further digitalization initiatives among a wide range of industries in the Greater Bay Area. That, in turn, is fueling considerable demand for digital talent, such as solution architects, professionals in business development and innovation as well as marketing professionals.

The big obstacle these industries face is how to identify, attract, develop and retain that talent. And the biggest winners will be the businesses who leverage digital HR tools to resolve their talent challenges and foster digital transformations within their sectors. 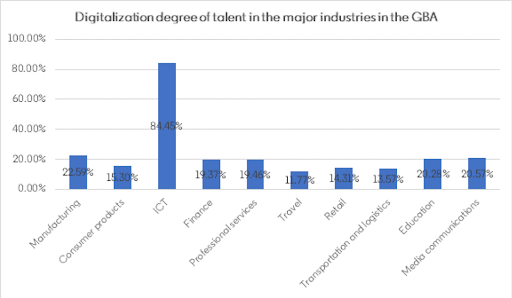 Smart Cities aren’t powered purely by money, advanced infrastructure or impressive performance and efficiency. EVERYONE who lives and works in the environment has a part to play.

However, while some people possess the knowledge and imagination to turn ideas into solutions, the real question for a smart city, or any “smart” geography, is whether there are enough of them to support a digital transformation. In the case of the Greater Bay Area, the answer could be no. Or, more precisely, not yet!

Compared to the San Francisco or the Sydney Bay Areas, the Greater Bay Area has the smallest proportion of talent with doctoral degrees. That represents an opportunity for both the government and the higher education sector to creatively reimagine the landscape, creating multiple talent pools  and fuel the momentum behind a smarter Greater Bay Area. 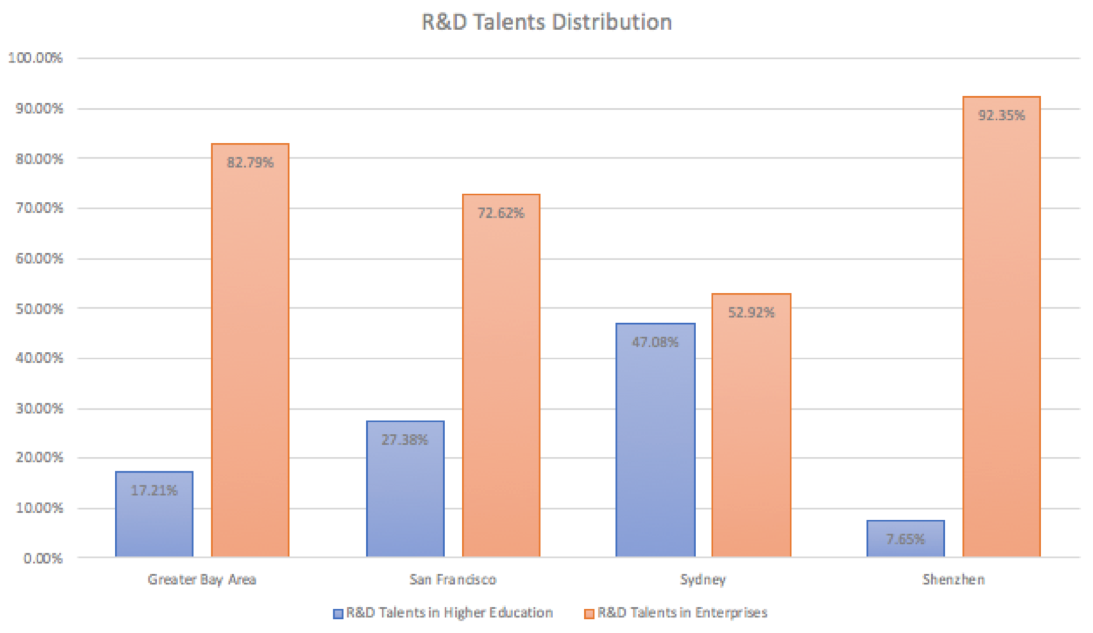 Talent isn’t manufactured. It is cultivated at every stage of life. The journey begins in elementary school, before moving on to secondary, higher and professional education. These days, even that isn’t enough. A long and successful career calls for a commitment to lifelong learning.

To nurture such core values in society, both the government and leaders in the GBA’s education sector have essential roles to play. They must seize the opportunity to evaluate and review their own macro growth plans. Nothing other than a digital transformation, powered by people, can deliver the values that are essential to shaping future talent in society.

The LinkedIn Tsinghua Digital Economy and Talent Development whitepaper also revealed that the GBA has the lowest proportion of entrepreneurs, compared with similar Bay Area megalopolises. However, at the same time, the GBA has a higher percentage of corporate R&D talent employed.

It is clear that such a combination calls for further efforts to promote the merits of entrepreneurship and risk-taking. Wouldn’t it be nice if corporate R&D talent had the opportunity to participate in innovation contests or hackathons? Such exchanges or competitions provide the ideal platform for the workforce to bring their creative ideas towards a broader audience of seed investors. And, ultimately, help to establish more startups and enterprises that can enrich the broader marketplace.

There is no reason why ideas that work elsewhere shouldn’t work in the GBA. For example, SAP is encouraging its employees to participate in the 1 Billion Lives social entrepreneurship initiative. It is designed to improve the lives of a billion people by developing a portfolio of lean, sustainable, shared-value ventures, operating at startup speeds, with the support of SAP.iO Venture Studio.

It is too early to tell if the GBA blueprint will be the success everyone is hoping for. But one thing is certain – it will definitely create a shift in market dynamics, which will require new skills and capabilities. Digital HR offers a roadmap to guide enterprises on their journey to a new and even brighter future.

Learn More How We can Help